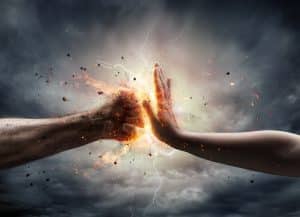 The uncertainty of pending divorce litigation or civil union dissolution and one´s financial future can cause people to make rash and ill-conceived decisions or behave contrary to their best interests. As you and your legal counsel seek resolution for child support, child custody, co-parenting options, division of assets, and alimony and spousal support, situations can arise where volatile emotions replace sound judgement and caution. The level of hostility and animosity among one or more people who may be past the point of reconciliation, can give rise to charges of domestic violence, harassment, and abuse.

Due to the sensitive nature of this topic, the New Jersey judicial system must determine on a case-by-case basis, which of those claims qualify as true domestic violence under the Prevention of Domestic Violence Act (PDVA).

For many Ocean County and Monmouth County residents, Attorney Peter J. Bronzino has been that dependable and tenacious advisor. Peter Bronzino personally handles all divorce case, prides himself on keeping his clients informed and involved in all matters, and is ready and willing to speak with you however is most convenient, including meetings via Skype, WhatsApp video, and FaceTime.

Call our Brick or Sea Girt Bronzino Law, LLC office at (732) 812-3102  for a free and confidential consultation today to discuss your unique needs, concerns, and situation when it comes to any kind of domestic violence or family law matter.

What happens when domestic violence allegations are filed while a couple’s divorce is pending?

With the trauma and emotional upheaval pending divorce litigation can bring, people may behave impulsively and inappropriately act in a violent way, as defined by the PDVA  2C:25-19(a). So it’s not uncommon for an act of domestic violence to occur on or about the same time as another litigation between parties.

Our experienced legal counsel guides victims through the process of getting a temporary restraining order.

The court seeks to move quickly to protect the victim of domestic violence at the hands of a spouse or significant other, and conducts a balanced and fair fact-finding analysis, without any preliminary inferences for or against the legitimacy of the complaint. Whether the spouse’s behavior or communication merits being classified as domestic violence requires fact-sensitive examination on a case-by-case basis. With thousands of charges being filed in New Jersey on a yearly basis, a critical eye is cast as to whether the defendant is using the law as a “sword” by intending to annoy or alarm the victim, whether the victim was in fact annoyed or alarmed or harmed, and if was necessary to file a restraining order as a “shield” to prevent immediate danger or further abuse.

Many unscrupulous ex-spouses have used false domestic violence allegations to gain an advantage in divorce or child custody court cases understanding full well the power that even an accusation can have. If an individual is accused and they are lucky enough to prove their innocence through the court proceedings, the negative allegations can still impact their lives and in many cases it does. Sadly, even proof of innocence may not be enough to repair one’s life or reputation.

For someone who has been accused of domestic violence while a family court action is pending, it is imperative that they make every effort to protect themselves and their rights. Even if the allegations are legitimate, they may be based on misunderstandings. The court must decide which party’s version of events is more credible and accurate.

You have rights, and it is critical that you move quickly to protect them. Whatever the case, having experienced lawyers who will vigorously defend you at the domestic violence hearing is critical. Once a temporary or final restraining order is issued and/or entered, the court has the discretion to make additional decisions regarding custody, parenting time, child support, alimony and counsel fees. The court is also required to order certain monetary sanctions against the defendant.

In State v. Hoffman, 149 N.J. 564  the Hoffmans had a history of domestic violence over the course of their seven years marriage. In the fall of 1992, the husband entered his estranged wife’s home in violation of a restraining order. While in jail, the husband sent his wife a notice of motion, financial statement and torn-up support order. In the following days she received additional items destroyed in a similar fashion. Although Mr. Hoffman was subsequently convicted on four charges of harassment and contempt, the Appellate Division reversed the decision, finding that the mailings were not likely to alarm or seriously annoy a reasonable person.  A later appeal of this decision to the New Jersey Supreme Court held that the defendant’s prior conduct and their relationship history must be considered, so they reversed “the judgment of the Appellate Division and (held) that the two mailings violated the permanent restraining order.”

The landmark case of Murray v. Murray, 267 N.J. Super 406, 410 is the origin of what has now become known as the “Murray Principle.” The assertion is, that if a domestic violence complaint is filed on or about the same time as the beginning of another family court litigation, the court may consider the potential relevancy of the filing as it relates to issues of:

The Murray Principle doesn’t not presume the charges are invalid, just the possibility that in a given case that a party has filed a domestic violence complaint to gain an advantage, is just as plausible that the defendant improperly committed domestic violence against plaintiff.

This carries the “more likely than not” civil court burden of proof standard of “preponderance of the evidence” N.J.S.A. 2C:25-29. The victim “may meet the burden of proof based upon persuasive testimony alone” and not the criminal standard of “beyond a reasonable doubt.”

Corrente v. Corrente, 281 N.J.Super. 243 While separated the defendant husband called the plaintiff while she was at work and threatened her with “drastic measures” if she didn’t give him financial support to pay his bills. He then cut off her home phone service and began calling her twice a day at her work. Though the trial court ruled this to be harassment an appellate review found that even though the defendant husband carried out his threat, his behaviour was more childish and not domestic violence because the plaintiff was neither harmed or subjected to injury or potential injury. The appellate court also stated that invoking the domestic violence statute trivialized the plight of true victims of domestic violence and the legislative vehicle which was developed to protect them. It was also found that this filing also sought an unfair advantage toward a matrimonial litigant.

D.C. v. T.H., 269 N.J. Super 458 Having had a child together, the defendant father and plaintiff’s new boyfriend had a verbal altercation over the corporal punishment of the minor child. Although the father’s statement of “I’ll kick his ass if he pulls her pants down and beats her again and I’ll kick your ass too” was deemed harassment, the Appellate Division reversed the ruling stating that the reason the defendant father made the comment, was to dissuade plaintiff’s boyfriend from inflicting further physical punishment on his child. As the biological father of the child, he had a right to verbalise his disapproval of what he saw as inappropriate corporal punishment. His conduct and word choices did not rise to the level of harassment, since the plaintiff could not provide proof that the defendant father repeatedly engaged in conduct or acts with the purpose of alarming or seriously harming his ex.

Regardless if you are the victim or it has been alleged that you committed an act of domestic violence against another. It is essential to act quickly when involved in a domestic violence incident, as these cases are among the most expediently addressed in New Jersey courts. To discuss your case with an experienced domestic violence attorney, contact the Bronzino Law Firm, LLC today for a free and confidential case assessment.

Call (732) 812-3102 or send a contact form to schedule an appointment with a Brick, NJ domestic violence lawyer.