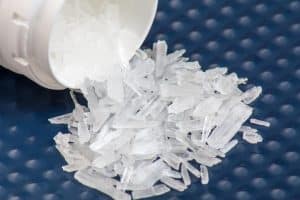 Methamphetamine, also known as “meth”, is a synthetic drug with more rapid and lasting effects than amphetamines. Like heroin and cocaine, it is considered a CDS (Dangerous Controlled Substance) according to New Jersey regulations. As stated by the classification organized by the Drug Enforcement Administration (DEA), it is considered a schedule II substance, which means that it has the capacity to generate potential abuse and serious physiological dependence. It is of critical importance to fully understand your rights and how to assemble an effective defense in the event you are charged for unlawful possession or distribution of Methamphetamine.

In the United States, drug abuse and addiction is an ever-growing issue and many refer to it as a full on epidemic. Monmouth and Ocean Counties not fall outside of this reality, and sees the abuse of mind altering substances effecting its communities every day. Some may consider Meth, a “hard” street drug that you would only find in the inner city or very rural America. and that is not the case at all. The prevalence of Meth possession and distribution in courts around the country are on the rise. If eventually found guilty the suspect can be charged under a third degree felony, which implies five years in prison and high economic fines.

If you or someone you love has been charged with possession or distribution of meth amphetamines, this is a serious matter with serious consequences. You do not want to proceed through the court system alone with a charge like this.Contact Peter Bronzino and his team of professionals who will be happy to guide you at (732) 812-3102 or schedule a free initial consultation via our contact form.

As established in N.J.S.A. 2C:35-10, which indicates: “it is unlawful for any person, knowingly or purposefully, to obtain, or to possess, actually or constructively, a controlled substance or controlled substance analog, unless the substance was obtained directly, or pursuant to a valid prescription or order form from a practitioner, while acting in the course of his professional practice, or except as otherwise authorized.” This means that to be able to charge and eventually convict someone for possessing methamphetamine, the state must demonstrate without any doubt that the accused knowingly or purposely, obtained or possessed, either actually or constructively methamphetamine under his control.

It is very important that the accused is fully aware of the implications and what it means to possess the CDS in any of the forms described.

Possession of methamphetamine is listed as a third degree as it is for an individual to be under the effects of this substance.  Sentences may vary depending on where the offense takes place. According to N.J.S.A. 2C:35-10(a)(1), if a person is found trespassing the guidelines established not within a school zone, is subject to receive from 3 to 5 years in prison, and a payment up to $35,000. If proved the person was under the influence of the drug while arrested, convicted of a disorderly person offense for being under the influence of methamphetamine, an offender may be able to face a maximum of six 6 months in jail, a $1,000 fine, and eventually develop a community service project and/or probation.

But, if the person is found with methamphetamine possession within the 1,000 feet limit of a school zone, or on a school bus, the consequences can be eve more grave. In addition to the penalties previously mentioned the person may also be required to perform at least 100 hours of community service.

Though it may not be a substance that many or familiar with or quickly come to mind when someone mentions common street drugs, however, methamphetamine use has slowly moved into communities across the US and certainly has a presence at the Jersey Shore. Some of its negative effects comprise irregular sleep patterns, nausea hyperactivity, increased and aggressiveness and irritability, hallucinations and in some situations, it can even cause convulsions with fatal results.

If you are facing the challenge of addiction and have now had your problems compounded with a possession charge, we are here for you and we understand. The attorneys at Bronzino Law Firm are compassionate and will not pass judgement. If you would like us to, we can even assist in finding rehabilitation and exploring drug court as an option for your case.  Call us (732) 812-3102 or fill out a contact form for a free initial consultation.