What Is Equitable Distribution And Divorce. How Does It Affect My Assets?

Most couples who begin a divorce are unprepared and not even on the same page when they begin. 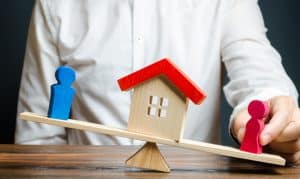 This lack of preparedness and readiness for divorce causes divorces to deteriorate into competitive contests, especially when it comes to dividing assets.

Also known as equitable distribution, property division divides property rights and obligations between spouses during a divorce. Property division may be agreed upon between the spouses through a property settlement or decided in court during the judicial process of divorce. The property division process is affected by state laws such as community property laws, definitions of marital contributions, etc.

New Jersey is an equitable distribution state, and only property acquired during the course of the marriage is subject to division following divorce. Some factors considered by New Jersey courts in a property division case include non-monetary contributions, contributions to a partner’s education, economic misconduct, and a list of other factors defined in New Jersey law.

Is there a set list of statutory factors for determining property division in the state of New Jersey?

What do the courts in the state of New Jersey consider in the decision of equitable distribution?

New Jersey law allows courts to consider the economic misconduct of a spouse as a factor in determining equitable property division. Economic misconduct generally means dissipation of assets, which is the legal term for the wasting or losing marital funds or assets by a spouse through means like excessive spending, gambling, fraud, etc.

If a spouse is found to have dissipated marital funds in a way that injured the other spouse, the court may take punitive or restorative action by awarding a higher percentage of the divided property to the injured spouse.

Can a pre-nuptial agreement affect property division in New Jersey?

A prenuptial agreement, or prenup, is a binding, legal contract signed by both spouses before getting married in New Jersey. A prenup containing a property division agreement can take precedence over New Jersey’s property division laws by establishing what is considered separate vs. marital property and agreeing on how finances will be structured during the marriage and divided in the event of a divorce.

The existence of a valid prenuptial agreement can prevent a New Jersey court from having full reign to determine how assets are divided between the spouses and instead allow them to be divided in a way agreed to by both spouses before the event.

Divorce is tough and determining who gets what does not make it any easier. At Bronzino Law Firm, LLC, our job is to make the process as smooth as possible.  Our goal is to help couples and families restructure, rather than destroy, their relationships through our legal and collaborative divorce services. We guide our clients to the best possible outcomes, both emotionally and financially, in the face of life’s most stressful experience. Contact us by calling (732) 812-3102.