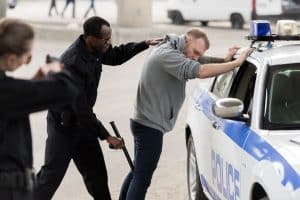 What is the difference between Resisting Arrest and Disorderly Conduct charges? Good question! Let’s look at what the law says.  In New Jersey, these two charges can go hand in hand.  You can be guilty of a disorderly arrest offense if you purposely prevent or attempt to avoid a law enforcement officer from effecting an arrest. On the other hand, we talk about resisting arrest when someone physically uses force to stop a police officer from arresting, handcuffing and taking a person to jail.

Sometimes, officers use the term “resisting arrest” to include any behavior that restricts or complicates an investigation.  The truth is that in some situations even responding reluctantly or slowly to an officer’s general commands could lead to a charge of resisting arrest. It’s also possible that an arrest may not need to be in progress to face charges under resisting arrest.  It gets worse if the person uses or threatens to use physical force or violence against the police officer, any other law enforcement official or any other means to create a substantial risk of causing bodily injury to the public servant.

If you had ever put under arrest, then you already know that resisting arrest is a misdemeanor. So, in addition to any other charges presented against you, resisting arrest and disorderly conduct are two more charges.  This behavior, of course, can lead to more fines, possible jail time and if facing these types of charges is is highly recommended that you seek the counsel of a qualified, reputable lawyer.

Call the Law Offices of Peter Bronzino today at (732) 812-3102, or fill out a contact form on our website to schedule a free and confidential consultation.

To a certain extent it is a little bit of a “he says, she says” situation between you and the police officer. It comes down to demonstrating who feels threatened the most and law enforcement will often have the edge on that aspect. Even with videos and witnesses, it’s challenging to prove that your defense wasn’t an aggressive offense justifying the forceful response by police and the subsequent charge of resisting arrest.

As far as obtaining a guilty judgment for a charge of resisting arrest, the prosecution must provide highly credible evidence of the following:

Also, the jury must be convinced beyond a reasonable doubt that the prosecutor has proven every element of the crime. The extent or degree of resistance that the prosecutor must prove is only that the amount of force or physical violence against the police officer by the defendant at the moment of arrest was sufficient enough to interfere or obstruct the police officer‘s ability to carry out his official duties.

How to Defend Against a Resisting Arrest Charge Brick NJ

To have the proper defense against arresting charges is essential to count on an experienced lawyer who is very knowledgeable about New Jersey laws, as well as the local judges and courts. Your attorney will build a defense strategy that addresses each charge against you.  Typically, defendants who are charged with resisting arrest offer one or a combination of these defenses. You will undoubtedly need to get legal protection.  Your attorney will know the exact requirements to prove these defenses in New Jersey.

Generally, deciding between guilt and innocence with a resisting arrest charge is not clear-cut. In most cases, most often resisting arrest cases are won through a strategy of careful investigation and planning.

At Bronzino Law Firm we care about your situation and provide you with the expertise and knowledge you need to defend your case. Contact our attorneys at one of our locations in Monmouth and Ocean County, to help you to prepare the best possible defense. Your lawyer will study the facts of your case to prepare a focused and customized defense strategy.

Contact Bronzino Law Firm today for a free and confidential case evaluation at (732) 812-3102 or visit us at www.bronzinolaw.com to fill out a form to get in touch with you.