Divorce in a Foreign Country: Is It Valid in New Jersey?

Get the Help of an Experienced Divorce Attorney understanding foreign divorces and how the United States treats such legal dissolutions.

A divorce is a complicated matter. Matters could be further set afield when the legal dissolution of the marriage occurs in a foreign country. That said, many seek divorce in a foreign country because the process is less complex and potentially conflict-ridden than divorce inside the US. When considering the implications of a divorce abroad, questions arise: ‘Is this divorce considered valid in the United States, let alone New Jersey?’ and ‘Can such a divorce be enforced?’

What Are the Types of Foreign Divorce in NJ?

There are four types of international divorce. These classifications depend on a number of factors, such as what part each spouse plays in the divorce, as well as where the spouses each live at the time of the divorce filing.

A bilateral divorce is a foreign divorce in which both spouses are present for and participatory in the proceedings. In the proceedings, they can either be physically present or represented by a local divorce attorney for the divorce to be considered bilateral.

An ex parte divorce is one in which the spouse who files the complaint for divorce is in the country of filing, but the receiving spouse is not. Instead, that spouse is notified of the divorce filing formally.

In some cases, a spouse is legally made unable to challenge the validity of the divorce because, given the circumstances, that attack on the divorce would be considered unfair. In these cases, a practical recognition divorce is named.

Finally, foreign divorces are not considered valid in the United States or a state therein. These divorces, in which a spouse files for divorce without informing their United States-based ex, are considered void divorces and are not held up in the court of law.

Is a Foreign Divorce Valid in the United States?

The US Department of State’s Bureau of Consular Affairs makes clear that the legality of a foreign marriage is within the judgment of each state; it is not a federal matter. However, it is helpful to note that, in general, the United States does view foreign divorces as legal as long as both parties were either active in the divorce or were made known of the divorce complaint and were able to participate or be heard in the divorce proceedings.

What Factors Will a New Jersey Court Consider to Determine a Foreign Judgment of Divorce?

New Jersey is not legally required to honor a foreign divorce. As such, the Superior Court: Family Part of the State reviews a number of considerations to determine whether the marriage is legally dissolved by its own standards. The court reviews whether both parties were awarded due process in the divorce and offered an opportunity to represent themselves. Additionally, the court ensures that at least one party was living in the country of divorce settlement at the time of the divorce. While the judgment is determined on a case-by-case basis, if the defendant had their rights of due process honored, including notification, and one party lived in the country of divorce, the court generally honors the divorce as valid in New Jersey. 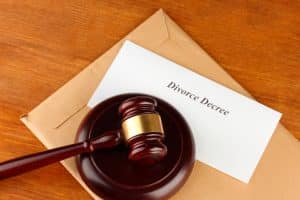 To domesticate a foreign judgment, you will need to obtain a certified copy of the divorce judgment from the country of issue and petition to the New Jersey Superior Court: Family Part through an affidavit to honor and therefore enforce the judgment. For the foreign judgment to be enforced in the United States, it must be domesticated.

What is the Black-Letter Law in NJ?

Under the principle of comity, a divorce in a foreign country – as long as it is conducted honoring due process and the rights of both parties – is generally honored and enforced in other countries that legally recognize divorce. This is called a black-letter law, by which a contract, or, in this case, the legal dissolution of a marriage, is considered unarguable.

Because there are so many ways in which the enforcement of a foreign divorce in New Jersey can go wrong, it is essential to have the support of a family law attorney. A New Jersey divorce lawyer can help you arrange the documents necessary to represent yourself in the case of an ex facto divorce. They can protect and represent you if the foreign divorce of which you are a defendant does not honor due process or your right to notification. Additionally, to domesticate your foreign divorce in New Jersey, your attorney will be an invaluable ally in the preparation of the affidavit.

Having a skilled and experienced family law attorney to help you navigate a foreign divorce and domesticate it for national validation is essential for your transition into the next chapter of your life in Toms River, Freehold, Mantoloking, Barnegat, Rumson, Middletown, Brick, and across Ocean and Monmouth Counties. At Bronzino Law Firm, we are here to support you and make sure that you are represented in every step. Contact us at (732) 812-3102 to schedule a free consultation regarding your foreign divorce and its enforceability in New Jersey.